Home Blog Why Music is Magic 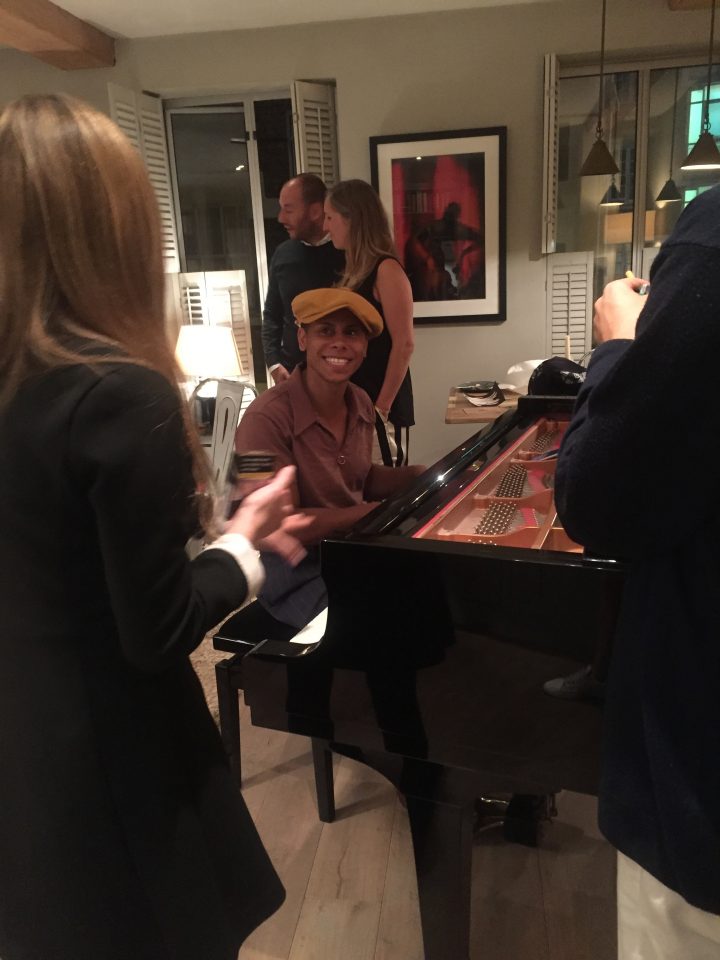 Why Music is Magic

BlogJul 25 2017Comments Off on Why Music is Magic

Magic. It’s a word we like to use a lot here at AWF HQ. Probably because we get to experience a disproportionate amount of it. We are magic seekers after all and like the great Roald Dahl once wrote, “…above all, watch with glittering eyes the whole world around you because the greatest secrets are always hidden in the most unlikely places. Those who don’t believe in magic will never find it.”

Well, our eyes have been glittering of late thanks to three very different gigs, by three very different sets of musicians who are all as it turns out connected through the late and beloved Abram. About two weeks ago we headed down to the Kansas Smitty’s bar on Broadway Market, if you’re tuning in to AWF for the first time then it’s probably worth mentioning that this is our home from home. Smitty’s are our Associate Artists and we’ve been with these bad boys since the very beginning. The achievements of these mega talented jazz musicians over the past three and a half years have been nothing short of impressive and so we were of course delighted to hear that their House Band, the one that kicked everything off, were doing a monthly slot at their bar over the summer. 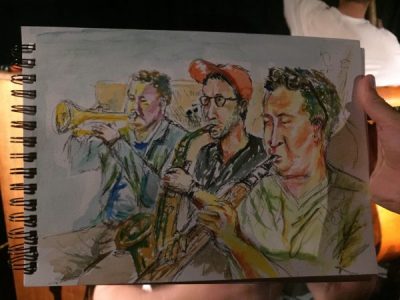 We arrived late, jazz style, and propped up the steamy, sold out bar with the most delicious, non-alcoholic refreshment we’ve ever tasted thanks to Smitty’s drinks connoisseur, Sophie. Yep, we were off the sauce that night, busy times, but we can’t recommend their cocktails enough. Alcohol, no alcohol, they’re an art in themselves. And the music? Magic, of course. It always is with these fellas. Headed up by Giacomo Smith they charged through tunes, old and new, delighting the hot, sweaty audience over and over again. It was a total vibe, magic music you could say as we were taken far away from the London heatwave to somewhere else, a time gone by, in a place of pure imagination (there we go again with the Roald Dahl references). Hidden away in the corner was Dora the Drawer, water-colouring the shizzle out of the band, the colours shooting out of their horns and straight onto her page. Like we said, magic. 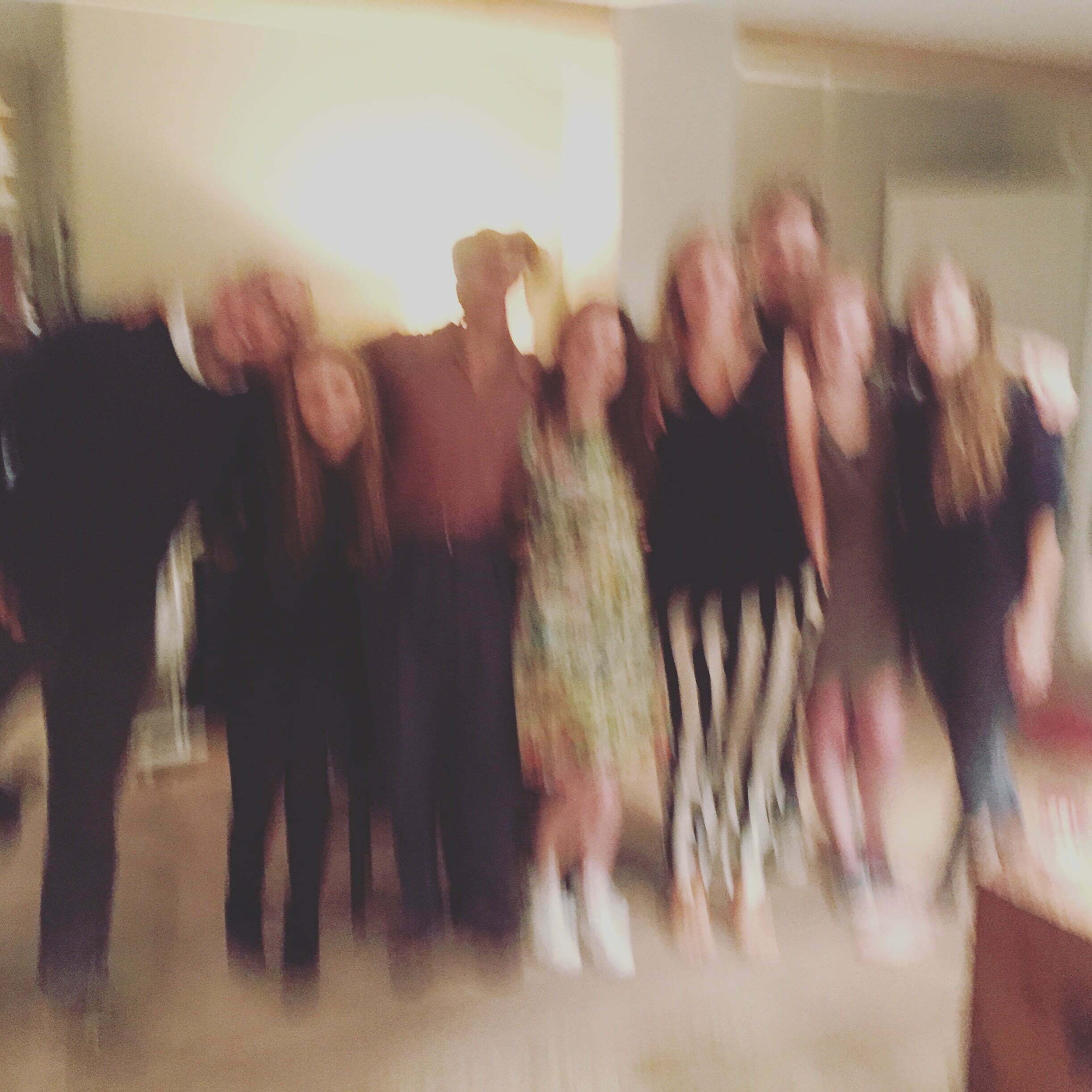 About a week later we were on our way to another gig, but this time in an entirely different setting on the other side of town. Our sparky and charismatic patron, Reuben James (who incidentally was the one who introduced use to Giacomo) was booked for his first auction gig since being successfully bid on by three different bidders at our fifth anniversary event back in May. The utterly delightful Vitto and Frankie had decided to go for an intimate evening with a few friends that would give Sofar Sounds a run for their money. For a start there was a Yamaha grand in the living room, we’re not experts when it comes to pianos but we know a happy Reuben James when we see one. The evening started with a private lesson with the lovely Frankie, who although a bit nervous at first was mega excited by the end of it – Reuben had started to break down the workings of jazz and it blew her classically trained mind opening a door to a whole new world. Soon everyone had arrived and amidst the quiet chatter and clinking of glasses Reuben began to work his own magic music. It didn’t take long before the room was utterly spellbound as Reuben gently woke his newfound love from her slumber. The rest of the evening was a beautiful blur of music and friends where every now and then we had to pinch ourselves to check we weren’t dreaming.

Laura Mvula and the London Symphony Orchestra at the Barbican 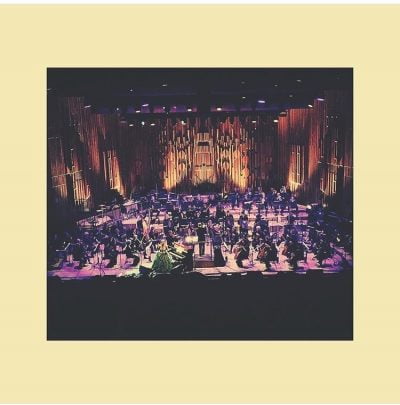 From one dream to another we unexpectedly became last minute ticket holders to see Laura Mvula and the London Symphony Orchestra at the Barbican the following night. Let’s just say that for the past two and a half years our founder, Jennie has been waiting to see Laura perform live with a full orchestra. Her moment finally arrived while floating home from Reuben’s private jazz concert with an offer of a spare ticket landing firmly in her lap. The next evening she went off in search of more magic music and she was not disappointed. To describe the stunning LSO, the captivated audience, the magnificent Mvula, the impressive Troy Miller on the conductor’s stand, her incredible band, in particular her younger brother and cellist, James Douglas and the beautiful arrangements of Laura’s first album would only give you a fraction of the emotion, sounds and talent that were shared by the 2000 audience members. It was a privilege and a joy to watch someone stand so firmly in their greatness. In a gown fit for the queen she is, Laura Mvula held the audience in the palm of her hand throughout the entire concert. From the moment she waited in the wings for her cue to ascend the stage to her final encore with the backdrop of the LSO behind her, it felt like she was exactly where she was meant to be.

Like we keep saying, magic. Three entirely different concerts, artists and audiences. Yet all connected by this wonderful thing called music. In the past two weeks we have transcended the limits of time and space and been taken on one incredible journey after another thanks to some brilliant musicians, many of whom we have the privilege of knowing and working with.

Are you part of the magic? Have you joined us yet? To find out more about how you can support the Abram Wilson Foundation and get involved hop over to our Trailblazer page here (aka our gorgeous donor page). And if you’re tempted by the idea of hosting your own Abram Wilson Foundation meets Sofar Sounds gig then please do get in touch. We would love nothing more than to bring the magic to you.