Home Blog What are your top songs of the summer? Bassist for Jorja Smith, Mutale Chasi gives us his 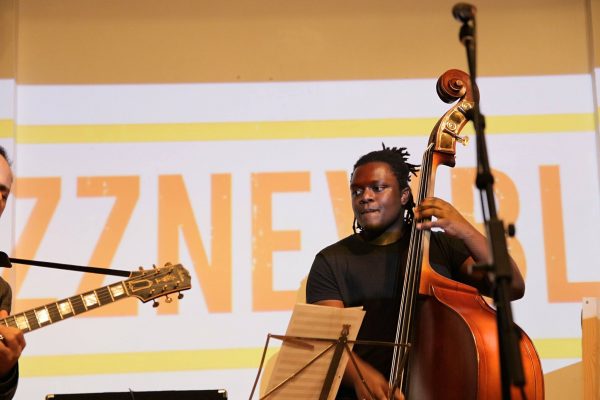 What are your top songs of the summer? Bassist for Jorja Smith, Mutale Chasi gives us his

BlogMay 22 2018Comments Off on What are your top songs of the summer? Bassist for Jorja Smith, Mutale Chasi gives us his

How did you get into music, was it always in your life?

Music has always been in my life, from singing along to hymns in church with my parents as a child, to intently listening to the radio trying to record songs on to cassette tapes using my uncle’s old radio. Back then I thought my mixtapes were fire! I didn’t, however, get into playing until I was in secondary school.

Why did you choose the bass?

One of my best friends convinced his mum to get him a drum kit and set it up in the front room of their house when we were around 13. His older brother already had an acoustic guitar so they convinced me to get a bass for my next birthday so we could jam. We then proceeded to teach ourselves whatever we’d come across and were into through playing games like Guitar Hero/Rock Band or just whatever we could find guitar and bass tabs to.

UK jazz is massive right now, what would you say to a young person who’s not sure if jazz music is relevant to them?

All you have to do is look at all the different artists making music on the scene right now. They look like you, they sound like you, they think like you, they listen to the same music as you, and you hear that when you listen to what they’re doing and where they’re taking jazz music. They’re making it for people like themselves, i.e. you.

You’re a busy guy!  Touring with Jorja Smith and supporting Bruno Mars, playing with Kokoroko, studying at Trinity Laban. What’s coming up next?

Balancing it all, that’s the next thing. At the moment I’m working on the last few assignments and my final recital at Trinity as I’m finishing this summer.

As for Kokoroko, we’re currently writing some new music which you’ll hopefully get to hear soon. We’re also going to be all over Europe for the summer festival season so keep up with us on all socials @kokorokomusic.

Same with Jorja Smith. Her debut album Lost and Found comes out on the day of my final recital, June 8th, so we’re going to be spreading the word and sharing her dope music with the people over summer and into the new year.

I’m gonna stick to stuff released this year to make it a little easier for myself.

It was still tough to keep it down to three tunes, so i’m gonna add in two honourable mentions for the culture:

Almost Went Too Far by Joe Armon-Jones for the bounce on the track.

Moonwalker by Brothers Testament for Hugo Piper’s bass playing and the Gordon Wedderburn appearance at the end.

Would you like to catch Mutale’s trio, featuring Kansas Smitty’ drummer, Will Cleasby and Deschanel Gordon on keys on Wednesday 30th May at the Hospital Club? Then what are you waiting for? Sign up and become an Abram Wilson Foundation Trailblazer HERE.