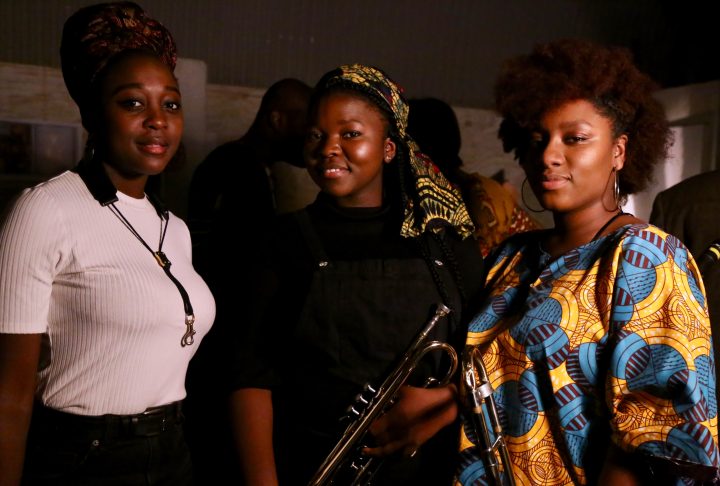 With just over a week to go till our five year anniversary fundraising celebrations on 11th May at Bush Hall, band leader of KOKOROKO, Sheila Maurice-Grey gives us the low down on this exciting, up and coming afrobeat group. Inspired by Fela Kuti, Ebo Taylor, Tony Allen and the great sounds that have come out of West Africa they play music they love and grew up with.

Sheila’s talents and experience encompass both visual arts and music having trained at Goldsmiths and Trinity Laban respectively. As well as leading KOKOROKO she’s a core member of upcoming Nérija, who were nominated for Jazz FM Breakthrough Act of the year in 2016 and has performed with Kano’s live band on the Jool’s Holland Show and The Mercury Prize. Most recently she has featured on Little Simz’s newly released album, Stillness In Wonderland. Last but not least Sheila is the artist behind our flyer and poster image for our five year anniversary gig on 11th May at Bush Hall. Talented, right?

Join Sheila and KOKOROKO on 11th May by grabbing your tickets here.

1. Tell us about KOKOROKO, who are you and how did you get started?

KOKOROKO started after Onome Edgeworth and I came back from a trip to Kenya. We were complaining about another band playing afrobeat and how the performance lacked energy. This was music we grew up with and therefore we wanted to pay homage to our ancestors as well as represent ourselves as British first and second generation migrants.

2. How important was arts education to you growing up?

Very important! It’s fair say that all our favourite subjects in school were within the arts from design, music, art, drama. For me, taking part in other projects outside school like The Roundhouse, UAL short courses, Tomorrow’s Warriors and Kinetika Bloco helped channel my desires to be creative.

3. What are your biggest musical influences?

Mat Fox, founder of Kinetika and my music teacher introduced me to so many different types of music that most of my peers didn’t listen to. Miles Davis was my first trumpet love and still is one of my biggest influences in sound.

4. What should people expect from a KOKOROKO gig?

Pure energy by a seven-piece afrobeat band who play music they love and get down to.

Oh! That’s a hard question. Each gig is so different and sometimes the unexpected happens. I personally really enjoyed our show at the Late at Tate last year. It was great playing to our peers and an audience that resembled us, pure energy.

6. What’s coming up for KOKOROKO?

We’re getting ready to record some new tunes…stay tuned! And of course we’ll be performing at the Abram Wilson Foundation’s five year anniversary celebrations on 11th May at Bush Hall. Tickets are nearly sold out so if you want to get down with us you’d better act quick.

7. Finally – what are your 3 recommended tracks from other artists that you rate?

Tickets for the Abram Wilson Foundation’s five year anniversary gig on 11th May can be bought here.