Home Blog ‘We’re designed to create’: takin’ over the world with Tyrone Isaac-Stuart 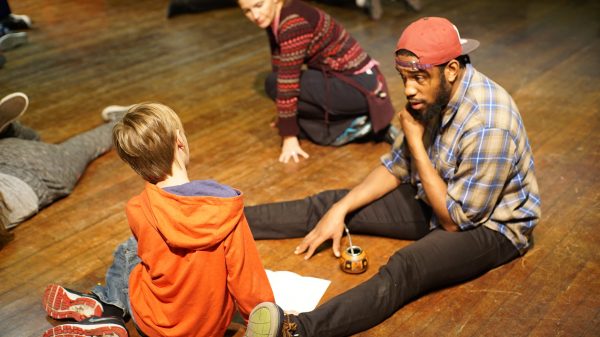 ‘We’re designed to create’: takin’ over the world with Tyrone Isaac-Stuart

BlogOct 23 2018Comments Off on ‘We’re designed to create’: takin’ over the world with Tyrone Isaac-Stuart

Pushing the boundaries where music and dance collide, Tyrone Isaac-Stuart has a BA in Jazz, is an alto saxophonist, founded the band Parshmaune and started his professional hip hop dance career with Barbican Associates Boy Blue Entertainment. He joined our Education Committee in 2014 before becoming one of our super-inspiring Achieve Your Greatness workshop leaders. Tyrone is now one of four artists to whom we will be providing regular ongoing support over the next two years as part of our Career Development Programme. I grabbed a few minutes with Ty after one of our latest workshops with two new primary schools in Greenwich.

Jennie: We’ve got a few minutes for some quick fire questions!  First up, why do you think it’s so essential to help young people Achieve Their Greatness?

Ty:  I truly believe that we’re designed to create. I’m seeing younger people struggle to do that. That for me is an issue. The more people develop their full creative potential the more resourceful we become. If that resource is used well, young people become greater in every possible way.

Jennie: Truth!  Was there someone who was a special inspiration or influence for you as a young person?

Ty: Yes, two in particular: Brendan “Syxx” Isaac and Andre Saxman Brown. If it weren’t for them I’d neither be dancing or playing music. Brendan came into my school, taught dance, mentored us and eventually led me to the iconic Boy Blue Entertainment.  Andre gave me saxophone lessons, mentored me and introduced me to jazz education organisation, Tomorrow’s Warriors where I was to meet many of the musicians that now shape the UK jazz scene.

Jennie: We’re so excited to be working with you as part of our Career Development Programme – what does it mean to you and how will it help you grow?

Ty: This Career Development Programme is kicking my butt! In a good way, however. It’s encouraging because I’m often in my own world dreaming up work. The pressure and support to see the “dream” through to a reality, however, is another ball game! I’m having to manage skills like a seasoned juggler, and that in itself is producing growth in areas unforeseen. I feel really privileged to have this opportunity. Hopefully you will see that through my output.

Jennie: Awesome.  Tricky one now – can you pick one thing that you’re proudest of so far as a musician and dancer?

Ty: It’s really hard to narrow it down to one thing. I can say however that my artistic situation exists because I stuck to my guns and pursued the two disciplines. After hearing all kinds of quotes about being a jack of all trades, others telling me what they thought I was better at and not being able to see the vision, I stand stronger than ever doing both. That’s something I marvel at, often. Only God knows what would have happened if I’d only chosen one. Anyway, the proudest thing I can say is that I’m still in pursuit of the two disciplines. That for me is a great accomplishment. My investigation originally was to see what happens when the worlds of music and dance collide. I now also investigate the opposite (what happens when the worlds of music and dance become more independent of each other) hoping to find flow between these to questions. I still don’t know where it’s gonna take me, I just commit to the process and have faith that it will take me somewhere special.

Jennie: It will!  I can’t wait for your Hospital Club gig on 31st October, what treats do you have in store for us?

Ty: This gig’s been a bit of a journey. The performance is called COVERS. It’s trio gig which includes a combination of improvised work and songs that I like. I feel often people have songs they love but don’t feel that they can play them for all kinds of reasons. I’m playing songs that I love, in hope that you’ll find some joy in them too.

Ty: It’s looking good! I’m thinking more about 2019 though. I’m working mainly in dance theatre for some great artists, going back to training, creating a show next year about umbrellas and finishing up a solo release. A big focus is to get back into live music performance, and lastly tryna take over the world. I joke. In part…

Get on our guest list to see Tyrone Isaac-Stuart play at The Hospital Club, London, on Wednesday 31st October 2018 by becoming an Abram Wilson Foundation Trailblazer.