Home Blog ‘The future is bright!’ KOKOROKO’s Yohan Kebede is on a musical journey 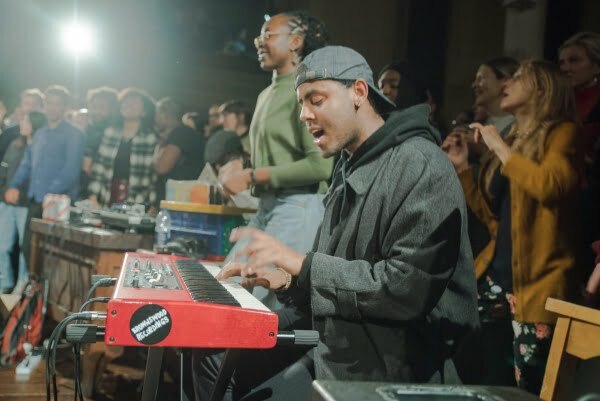 ‘The future is bright!’ KOKOROKO’s Yohan Kebede is on a musical journey

BlogFeb 18 2019Comments Off on ‘The future is bright!’ KOKOROKO’s Yohan Kebede is on a musical journey

Our super exciting Late Night Jazz series kicks off for 2019 next week, showcasing some of London’s most talented rising stars at the exclusive Hospital Club London. Ahead of his first ever solo gig, I caught up with KOKOROKO pianist, Yohan Kebede.

Jennie: You recently graduated from the London College of Contemporary Music. Growing up you taught yourself to play the piano by listening to records. Do you think that gave you a different approach to playing keys to someone who’s had music lessons from an early age?

Yohan: I think that’s a possibility. There were many things that I figured out on my own over a three year period which otherwise would have been taught to me within two or three lessons. Sometimes that feels like an advantage and other times it feels like a disadvantage. Hopefully in the long run it contributes to my originality. We’ll see!

Jennie: Who have been your biggest musical influences to date and why?

Yohan: I’m inspired by a lot of the greats like Ahmad Jamal, Duke Ellington and Stevie Wonder. They found their own sound and stuck with it – I think that’s the key. Reuben James (AWF patron) is also a massive influence for me. I really admire his playing and overall musicianship, plus he’s always offered me advice and given me stuff to listen to.

Jennie: What were your best moments from the Future Sound collaboration between KOKOROKO, Church of Sound and Mossbourne Community Academy in Hackney?

Yohan: The kids at Mossbourne were great! As someone who would like to get more into music education in the future, it was an invaluable experience to spend time with young people and help them explore afrobeat, jazz and their overall musicality. The highlight was seeing them compose their own tunes – they internalised the core values of the music so quickly and came out with some great music. The future is bright!

Jennie: We’re super excited about your Hospital Club gig, your debut performance under your own name.  What treats are in store?

Yohan: For my first ever solo gig, I’ll be taking some time to pay homage to my heroes; straight ahead jazz is an important part of my identity. I’ll also delve into some of the music I grew up with like grime, hip-hop and Ethiopian music. I’ve also got some great musicians as part of my band.

Yohan: 2019 has a lot in store for me. We (KOKOROKO) are about to release an EP (Uman) and go on tour all over the world. I also have more solo gigs, in addition to playing with other musicians around London. It’s gonna be a year of growth!

Jennie: And last thing, what are your top three tunes of the moment?

Yohan: Art Blakey On The Ginza; Sons of Kemet My Queen is Albertina Sisulu and Joe Armon Jones Almost Went Too Far.

Want to catch Yohan’s debut solo gig at the Hospital Club London on 27th February and get on the guest list for other exclusive events featuring London’s hottest up and coming musicians? Become an AWF Trailblazer now!