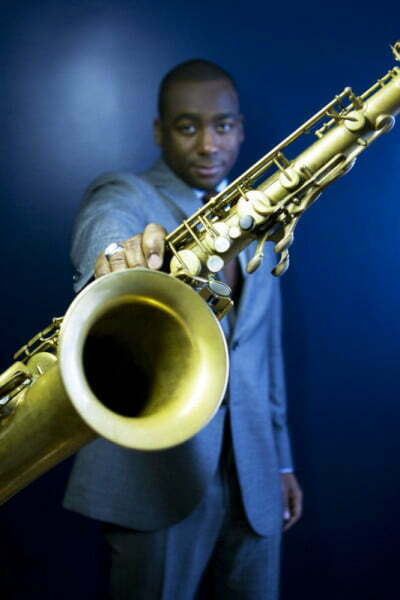 American saxophonist Keith Loftis will be part of the impressive line-up for the UK tour.

Saxaphone Giants are coming to town

A little more than a year after the death of acclaimed jazz trumpeter and composer Abram Wilson, his former manager and widow, Jennie Cashman Wilson, has put together a band for a UK autumn tour.

It is an opportunity to celebrate the life of her husband and pay tribute to some of the greatest saxophone players in the history of jazz, including Ben Webster, Dexter Gordon, Joe Henderson and John Coltrane. Wilson, originally from New Orleans, had lived in the UK for ten years and was working on a number of projects, including a UK tour, when he fell ill and died of cancer in June 2012, aged just 38 years. The tour, labelled Saxophone Giants, will visit Bishop Auckland Town Hall on Saturday 16th November.

In the quintet are long time friend and bandmate from Wilson’s New York days, American saxophonist Keith Loftis and the much loved, virtuoso tenor player Jean Toussaint, former band member of Art Blakey & The Jazz Messengers. They will be joined by two more recent members of Wilson’s band, rising star, Reuben James, and the highly respected drummer Dave Hamblett. Completing the group will be the young, but extremely accomplished, Mark Lewandowski on double bass.

For Jennie, who has established the Abram Wilson Foundation for Creative Arts to continue her husband’s legacy, the tour will be an emotional one, but something she felt driven to do. She said, “This tour brings together so many elements that Abram valued, such as the extraordinary talents of Toussaint and Loftis, two jazz musicians for whom he had an infinite amount of respect and members of his young rhythm section, James and Hamblett, whose potential he could see long before anyone had really heard of them. (They) will be playing the music of some of jazz’s greatest saxophonists, highlighting the enormous emphasis that Abram placed on the history of jazz and its importance in informing the future of the music.”

Durham County Youth Big Band will also be performing at the start of the show. Abram developed a strong relationship with the band over a number of years and, in honour of this, one of their alumni, trumpeter and composer Matt Roberts, originally from Darlington, has arranged one of Wilson’s compositions especially for the occasion.