Home Blog Stepping out – how can music change your life? 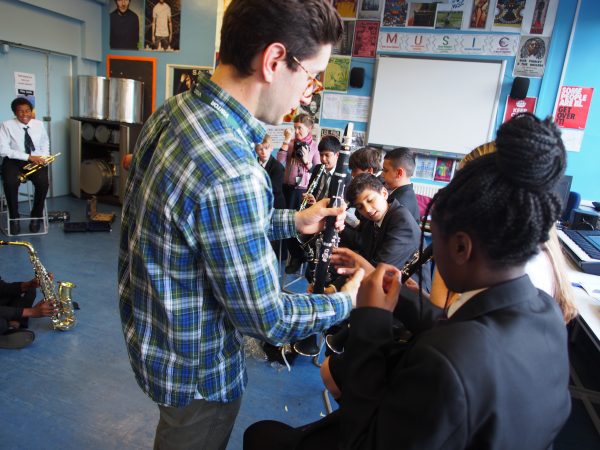 Stepping out – how can music change your life?

BlogAug 14 2018Comments Off on Stepping out – how can music change your life?

Achieve Your Greatness (AYG) is our arts education programme for 11 to 16 year olds from disadvantaged backgrounds, combining music with theatre, dance and spoken word. We train up and coming musicians and artists who pass on their knowledge and expertise to the next generation by going into schools to deliver creative workshops that develop young people’s skills. What better way to understand the difference AYG makes than hear the stories of just two of the young people we enjoyed working with?  Read on to see how we changed their lives in different ways…

Going beyond their daily experience at school, and experiencing the leadership of critically-acclaimed performers and artists, AYG workshops give young people the chance to build vital transferable skills that aren’t taught as part of the curriculum.  We call these the 5Cs: Creativity, Confidence, Collaboration, Communication and Critical Thinking.

For Penny* – a student with diverse heritage and English as a Second Language – a lack of confidence was holding her back.  This was Penny’s third experience of Achieve Your Greatness and during the first few sessions of the seven week music programme, she was noticeably introverted and lacking in self belief. Evaluating herself before the project, Penny said that she liked to try new things and wanted to be better at ‘taking a chance and trusting my intuition.’ But she also scored herself as being very concerned with ‘failing and getting things wrong’. She was among the students who had never played an instrument before, so learning one was a massive challenge.  She initially struggled, as well finding it hard to express and communicate her worries. Conscious of this, the workshop leaders worked to support Penny and make her feel more comfortable over the seven weeks of the course.

Gradually Penny started to make progress, which turned into great strides and by the end she was a standout student! Band leader Giacomo commented “She really wanted to perform and be leader at the final sharing.” Happily, all of Penny’s teachers also observed her progress, giving her higher scores across all the 5Cs after the project.

And most importantly, Penny assessed herself as having gained more confidence.  This showed how taking part in AYG helped her overcome her fear of failure, take a chance and trust her intuition.  In a follow up interview eight months later Penny confirmed that she had taken up regular music lessons as a result of the project and was now enjoying understanding and playing her instrument.  She said: “It’s made me feel really happy because it’s making me step out of my shell, because I used to be quite shy and now I’ve stepped out. I’ve moved on.”

Ryan* – also 12, mixed race and eligible for Pupil Premium funding – faced very different challenges.  Before AYG his teachers told us that he struggled to work with his peers, had behavioural issues, poor self-esteem, and lacked empathy towards others. They explained that Ryan had a difficult home situation and, ‘a lot of anger that he doesn’t know how to channel,’ which caused him to lose focus. He was frequently removed from class – particularly during lessons needing more discipline, like Maths and Science – and as a result his academic performance was really suffering.

However, when Ryan was taking part in AYG, workshop leader Giacomo noted that he was engaged, full of ideas and a good contributor, especially in writing song lyrics and narrative development. In an interview a month after AYG Ryan said, “I remember learning to work in a team and to write songs and skills that I didn’t know before.” Teachers also observed his good behaviour during the sessions and scored Ryan as having improved in his Critical Thinking, Confidence, Creativity, and Communication. Ryan told us that during the AYG workshops, “I felt happy and excited because I was learning new things.”  It was wonderful to see Ryan respond so positively to the alternative methods of learning that a creative education allows, helping him gain new experiences and to develop and progress.

With your help we can inspire and support even more young people like Penny and Ryan!  Check out our latest AYG VIDEO and please become an Abram Wilson Foundation Trailblazer – you can read how HERE

*The young people’s names have been changed to protect their anonymity under our child protection policy.