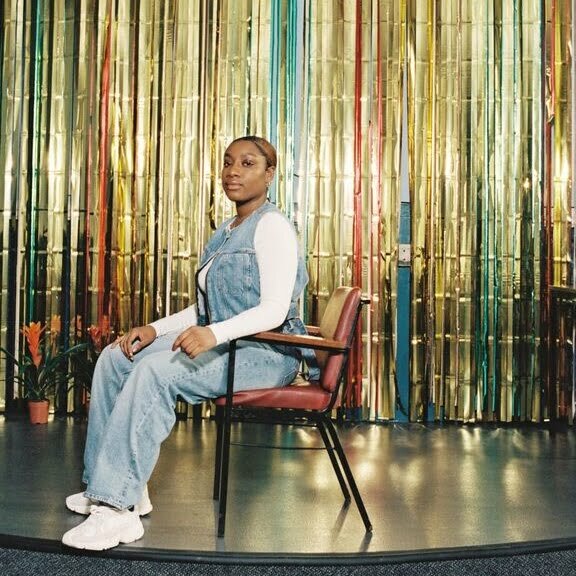 Richie Seivwright is an awesome trombone player, vocalist and composer who features as our next Late Night Jazz showcase artist at h Club London on 27th March. With KOKOROKO Richie helped lead our recent Future Sound project and the band has just released its debut EP. I caught up with her in exciting times!

Jennie: You’ve said that your sound reflects growing up in a Caribbean household, can you tell us about your early musical life?

Richie: No one in my family is a musician but both of my parents are music lovers so there was always a lot of good music playing in the house, from reggae to rare groove, soul to hip hop etc. Just standard black music. Primary school is where I started my music educational journey but it wasn’t until I was 13 that I decided to stick to one instrument. At 6 I started on violin, dropped that then picked up piano then picked up bass and so on. I guess I just wanted to explore and try everything. Growing up in South East London there was so much culture about so it was hard to not be aware and influenced by it all from the Ghanian brother playing highlife and afrobeat records on his stall, to the Chinese family playing traditional Chinese music in their supermarket. So yeah I’d say my music is not only influenced by my Caribbean heritage but also from everyone who I’ve connected with along the way and their stories.

Jennie: And what led you to stick with the trombone?

Richie: Quite simply I was offered trombone taster lessons by my music teacher in secondary school. They were offering lessons for the less popular instruments like the trombone and bassoon to the students and I was still jumping around on instruments, so of course I was up for it. I ended up loving it and decided to keep on playing since I’d never really seen or heard anyone who looked like me playing trombone.

Jennie: Why was it important to you to be a part of Future Sound and what were your highlights?

​I really loved being involved in the Future Sound project because it reminded me of when I was at school taking part in similar projects. It felt good to be a product of those opportunities and now be a person leading the workshop. It is so important for projects like that to exist, when you’re a youth you’re mostly reliant on school or an institution to enjoy your passions and sometimes that’s not enough, especially if that department is lacking. So it’s always good to have external people come in show you something new. Whilst I was at school I was involved in loads of projects and was given many opportunities outside of school too, which is what got me into the music seriously. So I feel it’s absolutely necessary for me to give back all I’ve received.

Being the big kid I am, my favourite part was the games at the start and end of sessions! Highlights for me were when one of the students who was a singer heard a couple of us playing a ballad called ‘Body and Soul,’ then went home, learned it, showed it us at the next session and then we got her to perform it at the show. And the session when we got the students to compose their own tunes was definitely one to remember.

Jennie: How did the new record came together and what are the inspirations for the tracks on it?

​Richie: The EP is a collection of four tunes that in my opinion really define KOKOROKO, who we are, what we’re saying and where we come from. All the tunes were written by a member of the band but every tune was workshopped and developed by everyone, and they’ve really evolved into what we class as our sound in 2019. We play Afrobeat so of course our core influences include heroes like Fela Kuti, Ebo Taylor and Tony Allen, but since there’s eight members in the band who all come from somewhere different and are into different things, you can hear influences from all kinds of places and people. You can hear the strong Stevie influence in Yohan’s playing and how he comps, you can hear Oscar has listened to a lot of Malian Kora music, with Cassie’s raw cutting sound on alto you can hear how much she loves Jackie Mclean, the list honestly goes on and on…

Jennie: And finally, who’d be in your dream band line up and why?

Richie: I don’t have a particular dream line up, I would just love to play with my friends!

Richie Seivwright plays h Club London on Wednesday 27th March. Join the Abram Wilson Foundation as a Trailblazer to get on our guest list for exclusive gigs.