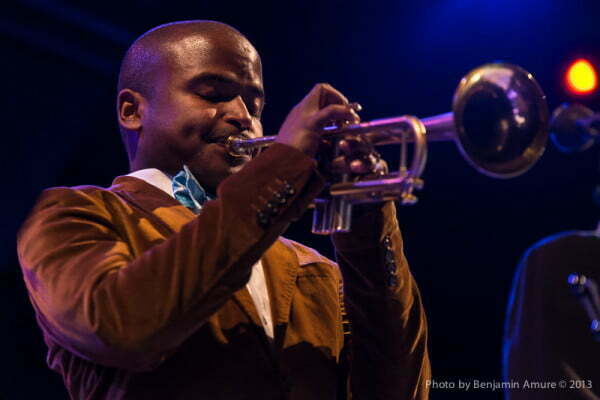 REVIEW – A TRIBUTE TO ABRAM WILSON

BlogNov 26 2013Comments Off on REVIEW – A TRIBUTE TO ABRAM WILSON

A Tribute to Abram Wilson

Opening the concert, Jennie Cashman Wilson, Abram Wilson’s widow and convenor of the London-based Abram Wilson Foundation, spoke touchingly about her late husband’s many plans and projects, these abruptly stilled by his death in June 2012 aged just 38. Her determination that this gifted New Orleans-born trumpeter’s music should be perpetuated and his memory properly celebrated prompted the concert and it would be hard to imagine a more fitting way to remember him.

Pianist Reuben James, very much a Wilson protégé, was the frontman for the opening quartet sequence, with the prodigious young New Yorker, Alphonso Horne in Wilson’s place on trumpet, bassist stalwart Mark Lewandowski and drummer Dave Hamblett tucked in behind. Horne, a new name to me and to many, I suspect, was the revelation of the night, an unforgettable presence, his trumpet attack and careful control of the compositional dynamics of a very high order indeed. He never flinched or missed a cue at any point during a long evening of music; his full-toned certainty and solo brilliance both revelatory and deeply satisfying.

The quartet having essayed a series of groovy pieces from Wilson’s Philippa Project (dedicated to the Harlem writer Philippa Schuyler), the group was augmented by Jean Toussaint, Peter King and trombonist Trevor Mires, reprising music from Wilson’s Running with the Flame, this comprising a clever reworking of national folk songs tied to the Olympic ideal. Interestingly Wilson’s writing here took on something of the warm voicing and rhythmic ease of Ellington’s small groups, with Toussaint at his most joyous and Mires impressively agile.

If all of this was not enough, the second half erupted into the kind of swing-fest that seems only to happen when New Orleans musicians get going, with drummer Jason Marsalis (fresh in from the Crescent City) the principal instigator, his whiplash authority on the bluesy ‘Steak and Potatoes’ creating sufficient rhythmic drive to transport the entire Purcell Room audience into whooping ecstasy. With able tenor-man Keith Loftis, a Wilson chum from New York, added and the collective front-line pouring on the riffs, the final ‘Lil Liza Jane‘, Hamblett and Marsalis side by side at the drum kit, evolved into complete, vastly enjoyable mayhem. As one observer put it, ‘this’ll stay in the memory forever’. Quite so.