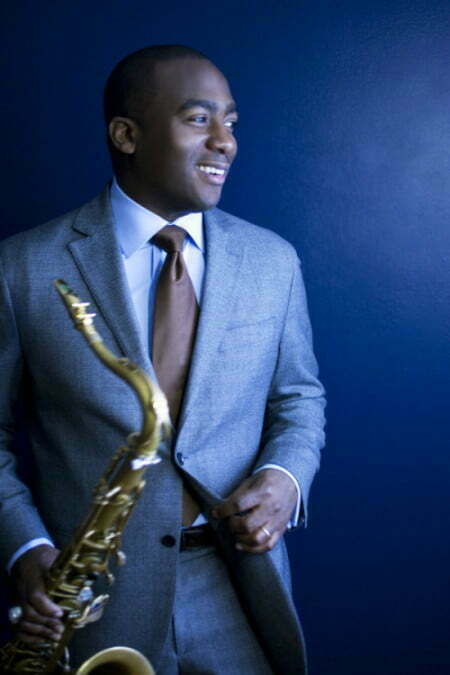 BlogNov 04 2013Comments Off on Q&A WITH SAXOPHONE GIANT, KEITH LOFTIS

With the imminent arrival of saxophonist Keith Loftis for the Saxophone Giants tour (he’s flying into London exactly one week today!), I thought it would be nice for y’all to get to know him a bit better.  Below is a brief biography and two sets of Q&As, one on Keith and the other on his friendship with Abram.  Enjoy!

Keith Loftis, 42 was born in Dallas, Texas where he studied both classical and jazz music from an early age.  He went on to attend the nationally recognised Booker T. Washington High School of the Visual and Performing Arts along with his childhood friend and two time Grammy award winner, Roy Hargrove. In August 1995, Loftis moved to New York to study at the New York School for Social Research.  In 2006 he received a Masters in Composition/Film Scoring from New York University.

During his early days in New York, Loftis joined Roy Hargrove’s big band where he met another young trumpeter from New Orleans, Abram Wilson.  It was the beginning of a long and fruitful friendship that led to Loftis joining Wilson’s newly formed quintet and playing on his first ever recording, Soul Vibe.

Throughout his career Loftis has toured across the globe, performing with jazz legends such as Benny Carter, Cedar Walter, Nancy Wilson, Frank Foster, Alvin Batiste, Abdullah Ibrahim and Ray Charles to name a few, as well as R&B star Mary J Blige. In addition to leading the Keith Loftis Quartet he performs regularly with Michael Carvin and Roy Hargrove.

Loftis lives in Brooklyn with his wife Brigitte.

What is your earliest memory? Going to the park with my mother.

If you could play another instrument what would it be, and why? Bass. They work more.

If you could only listen to one record for the rest of your life, what would it be? Here’s To Life – Shirley Horn

What are you most proud of? The love that my family has for one another.

Who would play you in the movie of your life? Derek Luke.

Who do you most admire most, and why? My wife Brigitte! For her unconditional LOVE and constant support.

What does jazz mean to you? Bringing your life and honesty to the bandstand.

What is your most treasured possession? My saxophone.

What is your favourite word? Absolutely.

If you could go back in time, where would you go? Egypt, to see how they built the pyramids.

How did you meet Abram? Playing in Roy Hargove’s big band together.

What was your first impression of Abram? Arrogant.

How did you become friends? Shortly after we first met, Abram discussed putting together a quintet and asked if I would like to join and of course I said yes. We started rehearsing at his apartment in Brooklyn. The band eventually grew in into a septet with Abram, myself, Vincent Gardener (Trombone), Mark Gross (Alto Saxophone), Richard Johnson (Piano), Michael Hawkins (Bass), Israel Bannerman (Drums), also Zach Pride (Bass) and Mark Colenberg (Drums). Abram and I spent a lot of time together working with kids doing workshops and masterclasses with an organization called Young Audiences here in New York. We shared the same views around marketing ourselves and creating an image or brand. Musically we had created a nice sound together and had really started to sound like a cohesive unit.

What was the best bit about your friendship? After playing together for a while and sharing ideas about life, music and the music business we really became close friends. He would come over to my apartment and my wife Brigitte would cook dinner; we would listen to music and just hang out. He was always driven and constantly thinking about the next move. I remember we had a steady gig at Puff Daddy’s (P. Diddy/Sean Combs) restaurant in Manhattan and the band would be swinging hard while the sports stars weren’t paying any attention, talking at the top of their lungs and Abram would say something like “Man, I wish they would sit down and shut up while we tryin’ to play some music”. We always had a great time together!

What did you like most about him? His determination.

What was the best gig you ever played on together? The Rochester Jazz Festival with his sextet.

What’s your overriding memory of Abram? How he constantly strived and I always enjoying seeing the child in him whenever he played music.

If you could sum up Abram in one word, what would it be? Passionate.