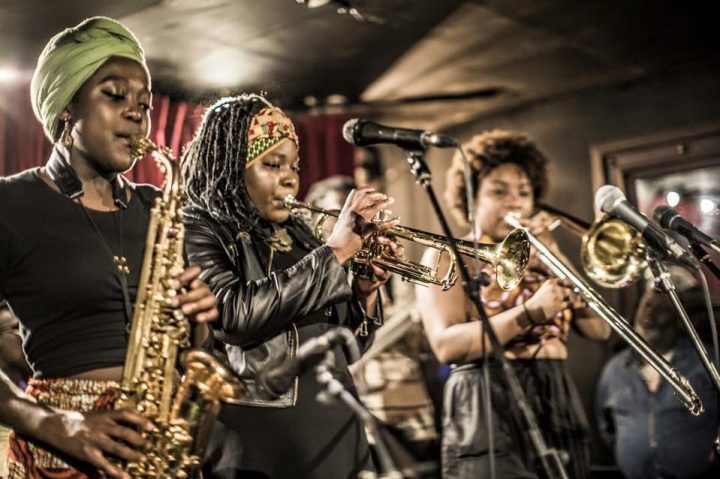 PASSING ON LESSONS OF CREATIVITY AND COLLABORATION: NERIJA’S SHEILA MAURICE-GREY

BlogFeb 01 2017Comments Off on PASSING ON LESSONS OF CREATIVITY AND COLLABORATION: NERIJA’S SHEILA MAURICE-GREY

Sheila Maurice-Grey is a London based trumpeter and visual artist. Having taken part in Kinetika Bloco and Tomorrow’s Warriors development programme founded by Gary Crosby OBE, Sheila is a core member of upcoming ‘Nérija,’ who were nominated for Jazz FM Breakthrough Act of the year 2016. Sheila is also bandleader of afrobeat band ‘KOKOROKO,’ has performed with KANO’s live band on the ‘Jool’s Holland Show’ and ‘The Mercury Prize 2016,’ and now features in LITTLE SIMZ’s newly released album ‘Stillness In Wonderland.’

Sheila was mentored by Abram Wilson and is now a workshop leader on our arts education schools programme, ‘Achieve Your Greatness’.

AWF: Tell us a little bit about your journey to becoming an artist.

S: I think I’ve always taken to creative subjects at school – whether it was art or drama – if it was something creative, I wanted to be a part of it. When at secondary school, a teacher spotted my interest for the arts and helped me to get started with learning an instrument. I tried out a few instruments from piano to baritone horn and trombone before settling on trumpet.

Age 18 I started Tomorrow’s Warriors where I met Abram Wilson. Shortly after I began regular trumpet lessons with Abram where I was introduced to importance of sound and the Blues. During this time I was at Art College, and I remember having conversations with Abram about the importance of bringing various art forms together as a way of collaborating. He would often encourage me to use my creativity in all areas not just one, and I too think it’s important that young people should be free to express themselves in everyway possible. This is one of the things I like about the Achieve Your Greatness schools education programme – it’s not just jazz, it covers a wide range of the arts from theatre to dance.

AWF: Was that the reason for why you got involved with AYG?

S: I had similar experiences when I was younger, from Kinetika Bloco, Tomorrow’s Warriors and Abram who helped to nurture my talent and creativity. Since I was a teenager, I have had experience leading workshops and working in schools – I love giving back and the idea that I can inspire others, as I was inspired growing up.

I had known about AYG for a while, but I didn’t have a clear idea of the full scope of it until I was asked to become a workshop leader.

AWF: How did you find the experience of being an AYG workshop leader?

S: It was a very new experience for me, and different to any workshops I’ve done before as the emphasis was not on my skills as a trumpeter, but on breaking down my knowledge and experience of jazz to a level where it became accessible to a young audience with no or very little prior knowledge.

What really impressed me was witnessing how the AYG participants started to think more creatively as the workshops unfolded. I also enjoyed seeing the other workshop leaders’ and learning their different approaches to teaching. Overall it was a great project to be part of, and I’d love to do more of these types of workshops in the future.

AWF: Tell us what’s next for you as a professional artist.

I’ve been a part of Nérija for about 4 years now and started my own afrobeat band Kokoroko 2 years ago. Nérija have recently released an EP whilst Kokoroko are preparing to go into the studio hopefully to release by this summer! I love playing in both bands as I get to play music I absolutely love and feel connected with. We have some really exciting shows coming up, both bands will be performing at the Rise festival, The Roundhouse and the Jazz café between February and March. Kokoroko will also be performing at the Abram Wilson anniversary gig 11th May, make sure you come to this!