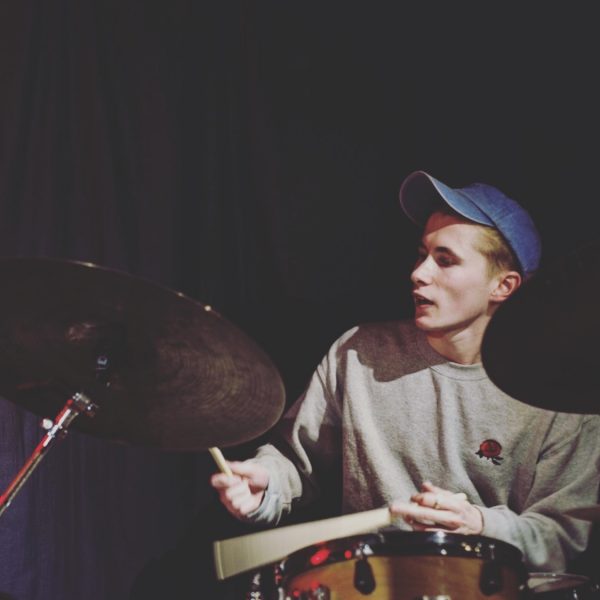 BlogApr 17 2018Comments Off on Miles Davis and the Foo Fighters, Drummer Will Cleasby Talks Musical Heroes and Rugby Tackles!

Will Cleasby is a jazz drummer originally from Lincolnshire and now based in south east London studying Jazz Performance at Trinity Laban Conservatoire of Music and Dance with tutors Dave Wickins and Gene Calderazzo. Since arriving in London three years ago, Will has become a working musician in London, playing with both young talent and veterans of the scene. Will is part of a number of projects and bands including Judi Jackson, the Kansas Smitty’s House Band and Kavuma and the Banger Factory with whom he’s played at Ronnie Scott’s, the Vortex, Cadogan Hall, the Barbican and most recently Shoreditch Town Hall as part of the London Jazz Festival.

Will is going to be leading our next Hospital Club late night jazz session on Wednesday 25th April so we decided to catch up with him to find out what’s been cookin’.

Was music always in your blood?

Music has always been a part of my family. My mum’s dad was a talented pianist while my dad plays electric bass, but the real reason I got into playing the drums was my uncle. I went to Birmingham one weekend and he’d just bought a set of Roland V Drums (electric). As soon as I arrived I was transfixed and just wanted to play them. Needless to say, I spent the whole weekend being antisocial, sitting with the headphones and trying to figure out stuff on the drums. So my uncle is to blame for all this!

Who are your musical heroes?

This question is always so hard to answer as I’ve had several different musical heroes over the years due to my changing taste in music. When I was younger and into rock music Dave Grohl from the Foo Fighters was a massive hero for me as he was the drummer in Nirvana. Being into jazz means one of my current musical heroes has to be Miles Davis. Miles is someone to look up to and admire just for the sheer genius and audacity to keep changing the music the way he did starting with Kind of Blue and then moving on to things such as Bitches Brew and his electronic period. Then obviously Tony Williams and Elvin Jones are my drummer heroes. Listening to their music and the way they play has been the greatest influence on the way I play drums. No matter how many times I listen to an album that they’re on, I always learn something new. They’re an endless supply of genius.

We‘d love to hear about your best gig ever…

I have two contenders for the best gig I’ve played. The first was last year when I played Sevilla Jazz Festival with the incredible singer Judi Jackson and we sold out the theatre there which was 500 people (the biggest crowd I’d played to at the time). It was such an incredible gig, we absolutely played our hearts out and the vibe was just so great and the audience was perfect, one of the must fulfilling times I’ve had on stage playing with some amazing people. The other best gig ever has to be the Kansas Smitty’s House Band’s sold out show at Shoreditch Town Hall last year for the London Jazz Festival. It was the best way to end a very hard and long week of rehearsals, it all came together for the show. It’s the most inspired I’ve felt on stage due to playing with such heavy and talented guys and the way we were received by the audience.

Where will we find you in London?

In London, you can find me at The Duke in Deptford every other Wednesday running a jam night there with some of the best young guys on the scene. On Thursdays I’m at the regular hang with Mark Kavuma and the Banger Factory at The Prince of Wales, Brixton. Fridays I’m usually down at Kansas Smitty’s Bar on Broadway Market, leading a trio with some of my favourite musicians. Other than that, you can catch me doing the late show at Ronnie Scott’s on occasion, or playing gigs here and there with Judi Jackson, if you want to know about the things I’m doing then follow me on Instagram @willcleasby and check my story!!

Tell us about the song you can‘t stop playing right now?

The song I can’t stop playing is Resolution by John Coltrane from his album A Love Supreme. There’s just something about the way he plays the head, and the feel between Elvin and Jimmy Garrison in the first little bit of soloing from Coltrane is just magical. I’ll never be able to get enough of it.

2018 is looking like a good year! I’ve got some big shows coming up with Kansas Smitty’s in Cheltenham, Bath, Gateshead and we will be back at Shoreditch Town Hall for the London Jazz Festival in November. I’m super excited to be doing my first Ronnie Scott’s main show with those guys on 7th May. GET YOUR TICKETS IF YOU HAVEN’T ALREADY! We’ll be doing a bit of touring in Europe over the next few months so look out for that. I’ve also got some recording coming up in June with Judi Jackson and I can’t wait to get into some stuff with her at the Blues Kitchen in Brixton on April 26th playing the music of Nina Simone.

Tell us something about you that would surprise us

I used to play rugby as a teenager and wasn’t afraid to put in the tackles. You wouldn’t believe it now as everyone grew and I stayed the same! There’s no way you’d see me tackling and throwing myself around now – gotta look after those fingers and arms!

On Wednesday 25th April Will Cleasby will be leading a trio at the Hospital Club as part of the our late night jazz sessions supporting up and coming musicians. If you’d like to get an invite and support our work at the same time then please consider becoming one of our regular donors and Trailblaze With Us. More info HERE.