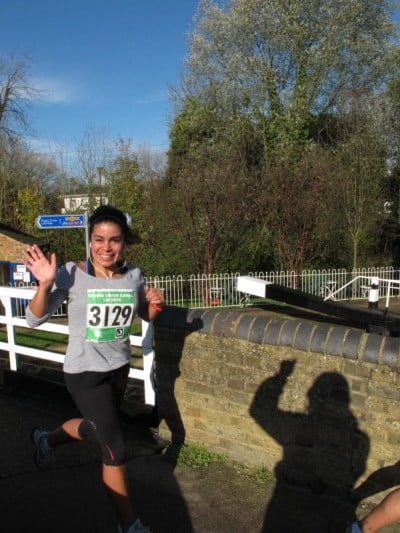 On 9th November a great friend and a big supporter of the Abram Wilson Foundation, Manuela Cea-Poblete (otherwise known as Manny) ran a half marathon in a very impressive two hours, raising over £1,000 for the Foundation.  Here’s her story:

At the end of the summer 2014 I decided to sign up for a half marathon. My initial motivation was a personal one, I’d been running for about three years, but relatively short distances and I wanted a challenge. I thought I was being quite clever choosing a race in November; I would be able to train before the real cold set in and eternal darkness descended on London. Having said that I then looked up different locations to see how far 21km really was – Camden to Harrow, Walthamstow to Deptford, Stratford to Sheperd’s Bush. It sunk in just how far I was going to have to run and I realised I was going to need more than a personal push to get me through the early morning training sessions and the eventual half marathon itself.

Like many others, I decided to find a cause to fundraise for, one that would inspire and motivate me to dig in when staying in bed seemed like a much more appealing option. I’ve been involved with the Abram Wilson Foundation since its inception and it is an organisation which is very dear to my heart. I was lucky enough to call Abram a friend and even luckier to watch him teach and perform. When Jennie decided to set up the Foundation I was right behind her. Watching the organisation grow from an idea into plans, strategies and projects has been a privilege and it’s been exciting to see so many others get behind it and lend their passions, thoughts and energy to making it grow.

I’ve always been a spiritual person and the more that people who are close to me pass on, the more this develops. Once I’d set my heart on doing the race for the Foundation I felt that Abram was there with me for every 6am run, spurring me on. Some days I’d be completely demotivated but I’d get myself out of bed and head down to run by the canal near my house. Once I hit the canal route, Abram’s positive energy would reward me with beautiful sunrises, swans, herons, and always, always two magpies. He had a sense of humour about his support too; once, towards the end of a 14km run, I wished that it was a bit cooler and it promptly started to rain heavily, drenching me within minutes. I became much more wary of asking him for anything after that.

Two weeks before the race I finally set up a fundraising page and sent it round to friends and family asking for their support. I had set myself the optimistic target of £1,000 not really knowing whether I would reach it. But my friends and family came through and had helped me raise £1,270 (before gift aid). Which was lucky, as on the morning of the half marathon I was freezing cold and very close to calling the whole thing off and going for brunch in a nice warm cafe!

My mum, step-dad and Jennie were amazing on the day as was my friend, Kate who I somehow convinced to do the race with me. Having them there got me to the finish line and knowing I was running for such an amazing cause and person probably made me the most smiley runner during the entire race. The whole time I kept thinking about Abram and how proud he would have been. He was always so proud of people who challenged and pushed themselves to do better and be better. I’m not entirely sure how I managed to run 21km in two hours but I guess it came down to determination, love and a bit of magic.

If you’d like to congratulate Manny by donating to the Abram Wilson Foundation, please click here (you will need to contact us directly re gift aid).

If you are from the United States and would like to make a tax effective donation, then please get in touch directly.