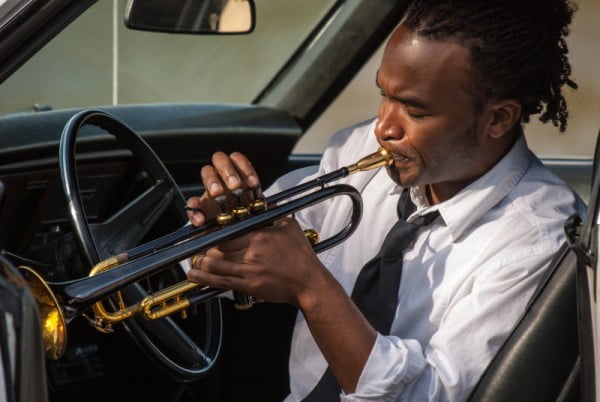 The countdown begins…exactly two months today on Wednesday 20th November at the Purcell Room, Southbank Centre, we will be paying tribute to Abram’s life with a concert celebrating his music from the final years of his career.

The gig will feature close friends and musical associates, including members of his talented young rhythm section who accompanied him on his final tour last summer.  Reuben James (piano) and Dave Hamblett  (drums) will be joined by Jason Marsalis  (drums); saxophonists Peter King, Jean Toussaint and Keith Loftis; Trevor Mires will be playing trombone; and Mark Lewandowski  will complete the rhythm section on the upright bass.

The well respected and much loved Pete Churchill (performer, composer and educator) has agreed to take on the role of non-performing musical director.  He’s already led one rehearsal and there’s another planned in a couple of weeks so that we’re ready for when the Americans come!

But what of the trumpeter?  I hear you ask.  Well, the decision to fill this particular spot was not made lightly.  I knew that in order to honour Abram and his music properly I had to find someone he would be happy with.  Anyone who knew Abram, knew how picky he was when it came to trumpet players.

Fortunately, help was at hand.  Cue the wonderful jazz pianist and composer, Marcus Roberts.  I explained to him that I was looking for someone young who the majority of people wouldn’t have heard of yet, and most importantly someone who could do Abram’s music justice.  Marcus had experienced Abram’s playing first hand at Ronnie Scott’s in March last year; he invited Abram on stage to join his band on a blues and it was one of the highlights of Abram’s career.  I felt that Marcus would have a good sense of what I was looking for.

He immediately suggested a trumpeter by the name of Alphonso Horne, whom he had taught in Florida and was just finishing his masters at Julliard in New York. He couldn’t praise him highly enough and it sounded like a great fit.  I called Alphonso and we had a chat about the gig, he said he would be honoured to play and that was good enough for me. Alphonso is a very similar age to when Abram first moved to London back in 2002, so it kind of feels like this performance is also about passing on the flame to the younger generation who are just beginning to make their mark.  I know Abram would have approved.

The other day, I came across a beautiful quote which I think sums up this gig perfectly:

“Although some people’s stories have come to an end, they live on in the stories of others”

To book your tickets please visit the London Jazz Festival website HERE. I very much hope you to see you there.