Home Blog LINE UP ANNOUNCED FOR OUR FIFTH ANNIVERSARY CELEBRATIONS 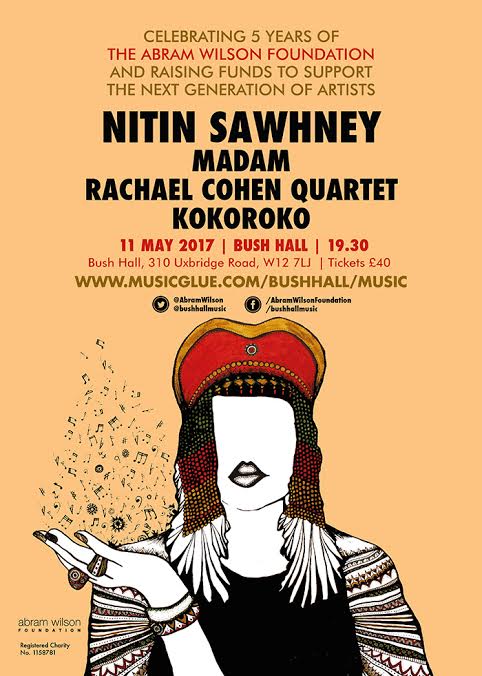 LINE UP ANNOUNCED FOR OUR FIFTH ANNIVERSARY CELEBRATIONS

We’re back for our five year anniversary celebration on the 11th May at Bush Hall! This year is set to be bigger and better as we bring together performances from some of the brightest and best emerging musicians in London at the moment. Our almost entirely female line-up includes MADAM, the Rachael Cohen Quartet and Kokoroko. The event will also feature a performance from special guest performance from Nitin Sawhney, the world-class producer, songwriter, DJ, multi-instrumentalist, orchestral composer and cultural pioneer. Expect exceptional performances, a raffle, live auction and more! Funds raised on the night will go towards supporting the next generation of young artists. Get your tickets here!

Speaking about the event, Nitin said: “The Abram Wilson Foundation is all about musicians giving back and sharing their skills with young souls searching for new and deeper modes of expression. The AWF uses the spirit of jazz to find the path from shadows into light through education, collaboration and musical catharsis.

I am therefore honoured to be performing at this charity event with some of today’s finest up and coming UK musicians to channel a common voice in this established London venue.”

Each year, we come together to celebrate Abram’s life and showcase some of the hugely talented musicians that we are lucky enough to work with at the Abram Wilson Foundation.

Led by the formidable Sukie Smith, MADAM’s latest album, ‘Back to the Sea’ was selected as one of the Guardian’s and Penny Black’s album of the year. Sukie describes this third album as “an ANTI DEATH MANIFESTO” and “a love letter to human nature, an acceptance, a recognition of a certain amount of bitter glory in everything.”

Rachael is a London-based alto saxophonist and composer, and one of the brightest emerging stars of her generation. Her skills as a composer and improviser have gained her a great deal of attention in the UK and beyond.

Led by the rapidly-rising-star Sheila Maurice-Grey (who you may have heard featured on Little Simz’s newly released album, Stillness in Wonderland), Kokoroko is an exciting young all-female afrobeat seven-piece. They play music they love and grew up with, inspired by Fela Kuti, Tony Allen and the great sounds that have come out of West Africa.

Last year our fourth year anniversary celebrations, which featured amazing performances from a wide range of exceptional musicians, including Cuban trumpeter Yelfris Valdes, AWF Associate Artists’ Kansas Smitty’s, and AWF Patron Reuben James got glowing reviews. LondonJazz described the event as “clearly looking to the future, even while remembering and honouring the much-missed musicians who inspires their work.” We can’t wait to do it all over again, but even bigger this year!

Funds raised on the night will go to support the next generation to artists – get your tickets here.

Keep an eye out for special guest blogs introducing our performers in more depth. We’ve also made a playlist to give you a little taste of the event – give your ears a treat