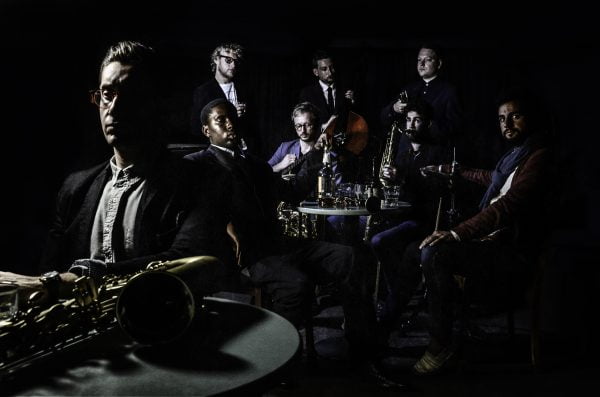 The Abram Wilson Foundation is proud to announce Kansas Smitty’s as one of our founding Associate Artists. Officially launched in 2013 by eight hungry jazz-possessed twenty-somethings today Kansas Smitty’s consists of the Kansas Smitty’s House Band, an ever increasing community of young jazz musicians, and the world’s best imaginary jazz bar on Broadway Market (which for the last year has been very, very real).

The Abram Wilson Foundation began their relationship with Kansas Smitty’s in early 2014 when we began mentoring one of the Smitty’s founders, Giacomo Smith, helping him to secure two year support from the City Music Foundation. This then led to the recording and release of the Kansas Smitty’s House Band’s debut album in October 2015 (listed by the Telegraph as one of the top jazz albums of 2015).

As half the band had a connection to Abram, Kansas Smitty’s was a natural fit for us and we have used them as our starting point to support other musicians from the Smitty’s community. They in turn act as workshop leaders for our education project, Achieve Your Greatness and performers in our flagship jazz-theatre production, The Philippa Project.

Meanwhile Kansas Smitty’s have built their reputation as young and hungry virtuosos that challenge the definition of jazz with their incendiary live shows and have received praise in the jazz and mainstream press, including The Evening Standard, the Sunday Times and the Telegraph.

They have independently produced and hosted their own large-scale ‘jazz raves’ across London at the VAULT Festival, Dalston Pond, The Peckham Liberal Club and weekly at a disused railway arch turned weekend venue, called The Arch Gallery.

They have also performed multiple times at every major London jazz venue (The Vortex, Pizza Express Soho, The 606 Club, Nightjar). Perhaps one their most notable achievements was a twice sold out main house show at London’s premiere jazz club, Ronnie Scott’s in February 2016.

In between of all of this in May 2015 they opened their own jazz bar on Broadway Market to rave reviews. With gigs almost every night, rehearsals every day, and some of the finest juleps in town they haven’t looked back.

The Abram Wilson Foundation loves working with these very talented young musicians and are thrilled that Kansas Smitty’s are one of our founding Associate Artists.

“We love working with the Abram Wilson Foundation because Jennie is really good at identifying passion in people early on and then turning that into something tangible. Recognising that spark in people is a difficult thing as it’s about making an investment in individuals who you think have promise and are willing to do the work. But if, like Jennie, you’ve seen that passion before you can usually pick it out again. She’s been brilliant at helping us to stay on top of what we’re doing and keep growing.” – Giacomo Smith, Kansas Smitty’s Bandleader

Kansas Smitty’s will be performing as part of our four year anniversary gig on 14th June at St James Theatre. Tickets can be bought HERE