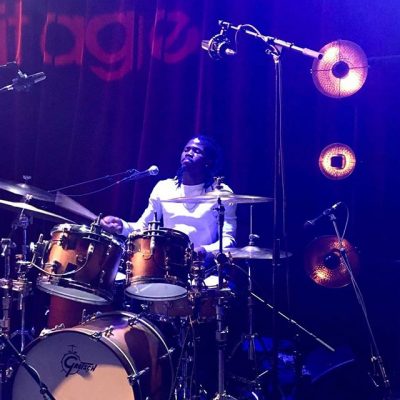 How an international childhood inspired my fusion style – Ayo Salawu

Our newest Late Night Jazz showcase events kick off again later this month at The Hospital Club in Covent Garden, yay!  So I caught up with London-based drummer Ayo Salawu who plays our first gig of the series on 26th September.  Ayo drums with Kokoroko, Oscar Jerome and Julia Biel and is fast making his name on the UK circuit, after finishing his studies at the Academy of Contemporary Music in 2016. He’ll be performing a variety of jazz-fusion pieces by artists that have been big inspirations to him, accompanied by other young, talented musicians in the industry.

And don’t forget, if you want to catch exclusive and intimate performances from some of London’s hottest young musical talent, then join us as an Abram Wilson Foundation Trailblazer HERE

Jennie: Ayo, you’ve been drumming since you were 2 and performing since 11 – wow! What inspired you to get involved in music?

Ayo: I was brought up in the church so each Sunday from when I was born I was exposed to gospel music. By the age of 2 years I was playing along to the gospel music my parents would listen to at home using pots with wooden spoons! My parents saw I had a passion for drumming and on my 4th birthday got me my first drum set. The journey started at church and I still play there whenever I can.

Jennie: How would you describe your musical style or genre, and who or what has influenced that?

Ayo: I aim to be as versatile as possible behind the drum kit. I’m lucky to be from two places that are so different music-wise, because it exposed me to different styles of music. It started with the gospel music, first in Bermuda where I was born, and then at age 3 when my family made a move to my dad’s country Nigeria I heard a lot of afrobeat and reggae music. As I grew up my ears would gravitate towards soulful funky music; music that would get you up your feet and dance. So I loved listening to Michael Jackson, Earth Wind and Fire and Kool and the Gang. When I turned 10 my family moved to the UK which is when a love for hip hop music started, and which has led to a love for jazz music over the past 5-6 years. As you can see I’ve been influenced by being exposed to loads of different styles of playing by growing up in different areas of the world. This is why Fusion is my favourite as it’s a combination of so many of the styles I’ve come to love since childhood.

Jennie: Who would be in your dream band line up and why?!

Ayo: Well, with myself as the drummer it would be with Hadrien Feraud on bass, Herbie Hancock on keys, Mike Stern on guitar and Chris Potter on saxophone. Herbie Hancock and Mike Stern because I’ve been influenced by their music and them bringing so much to Fusion music when it started popping. Chris Potter and Hadrien Feraud because of the musicality on their instruments, plus they’re my favourites to listen to.

Jennie: What are you listening to at the moment – can you tell us your top 3 playlist tunes so we can check them out?!

Jennie: Cool choices.  Finally, what’s been your most massive career highlight so far?

Ayo: My favourite and biggest moment so far was closing the live music for the Worldwide Festival in Sete, France in July with Kokoroko. Reasons being the stunning amphitheatre we played at; the week long festival which is filled with some of the most beautiful people from all around the world and music from all over; the amazing and legendary UK DJs performing like Gilles Peterson and Goldie, and being able to share a big moment with the Kokoroko band who have all become like family.