Home Blog How Abram Wilson inspired me: Dylan Jones on his tribute gig 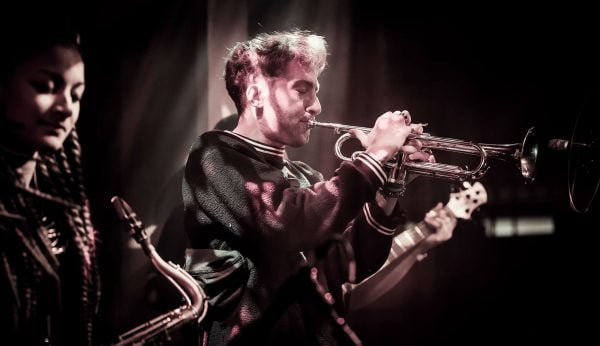 How Abram Wilson inspired me: Dylan Jones on his tribute gig

BlogSep 26 2018Comments Off on How Abram Wilson inspired me: Dylan Jones on his tribute gig

It’s going to be an emotional one on 3rd October when multi-award-winning Ezra Collective’s trumpet player, Dylan Jones pays tribute to the late Abram Wilson, his former teacher, in a special gig at the Hospital Club.  Forming a unique quintet – including the formidable Will Cleasby on drums – Dylan will play a selection of tunes composed by Abram.

One of Abram’s younger brothers, Saleem, is travelling from the States especially for it!  He says:

“They say success leaves little clues behind and, if that’s as true as they say, Abram left behind the notion of dedication to one’s craft, love for hard work, respect for individuality and a spirit of unconquerable love. He just wanted to love everyone through his music and have them love him back. I’m so proud to know that Dylan is one of his former students and cannot wait to meet him.”

As Ezra’s super-successful European tour draws to an end, I grabbed a few minutes with Dylan…

Jennie: What first got you involved in music and did you always want to learn the trumpet?

I had a fairly musical upbringing, both my parents studied classical music at Goldsmiths and listened to a very eclectic range of music, from jazz and reggae to folk music and disco. At primary school we were given the option of taking up an instrument for one-on-one lessons, I think I choose the trumpet because it seemed the coolest to me at the time!

Jennie: What advice would you give a child or teenager who’s starting out in music today?

Don’t feel like playing a musical instrument like the trumpet, violin or sax means you can’t play cool music and music you listen to. The comeback that jazz is making shows that anything is possible – follow your dream! Also, work hard and never give up, challenge yourself.

Jennie: Tell us what it was like to be taught by Abram and how he inspired you?

Abram was my teacher for a few years and to this day is one the most inspiring teachers I’ve ever had: charismatic, driven, passionate, humble and a great teacher. Not only was he amazing technically on the horn but his energy, creativity and drive was like no other and was intrinsic in my musical upbringing. He really listened to my thoughts and ideas in lessons and also my playing, which made me feel like I could really become someone and that I could be great. He provided me with such a wide range of skills – from technical to how to touch someone musically, to how to be honest to yourself. It is rare for someone to have all these skills as a teacher. All in all he was a great mentor and inspiration to me and many other people like me.

Jennie: And what does playing the this tribute gig mean to you?

For me, Abram was one of the first people I cared a lot for to pass over and because his death was so sudden, not having a chance to say goodbye or have any closure left me feeling like I had to learn more about Abram, his life and his music. I felt like I would want to do a gig in homage to Abram and I feel very lucky to be given the opportunity to do this with the Abram Wilson Foundation. It’s been amazing looking over his charts and recordings and the tunes of his that I’d never heard before. And trying to play them… WOW, he could really play, his tunes are very difficult and advanced on the trumpet.

Jennie: Apart from Ezra Collective (obvs) who would be in your dream band line up and why?

Kurt Cobain – raw! Art Tatum, just amazing. Christian McBride, no one can play bass like him, and also he seems like a nice guy.  And Jamire Williams, for me he is one of the best.

Jennie: What are you listening to right now, can you tell us your top 3 playlist tunes for the Autumn?

Jennie: Awesome, thanks!  And finally, 2018 was a MASSIVE summer for Ezra, can you pick a highlight?

The Fela Kuti Songbook at Church of Sound was a great moment for me personally. It felt like a celebration of what we as a band had accomplished over the years. The venue was amazing, set up so we were all facing inwards towards each other with the audience around us. The audience had a great time and so did we.

Fancy being at super-special gigs like Dylan’s in the future?  Simply join us as an Abram Wilson Foundation Trailblazer.

Ezra Collective are playing across the UK through November, finishing with London’s KOKO on the 18th.  More info at www.ezracollective.com