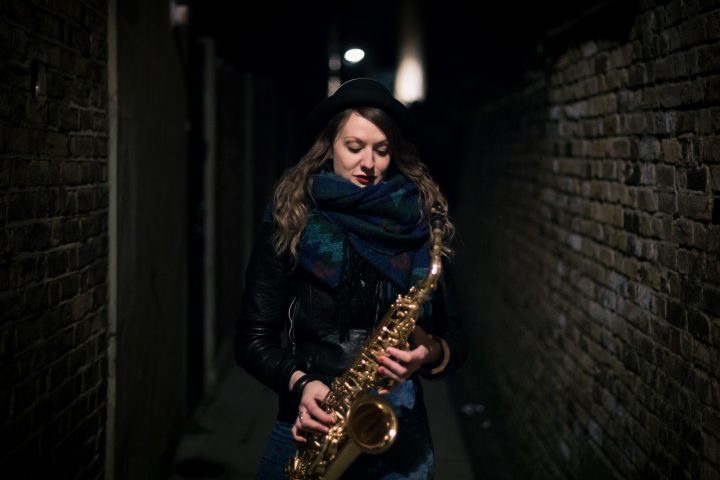 FROM THE SHETLANDS ISLES TO LONDON VIA BIRMINGHAM: INTRODUCING SAXOPHONIST RACHAEL COHEN

BlogMar 27 2017Comments Off on FROM THE SHETLANDS ISLES TO LONDON VIA BIRMINGHAM: INTRODUCING SAXOPHONIST RACHAEL COHEN

Rachael Cohen a London-based alto saxophonist and composer, is one of the brightest emerging stars of her generation. Her skills as a composer and improviser have gained her a great deal of attention in the UK and beyond. The Rachael Cohen Quartet will be performing at the Abram Wilson Foundation’s Fifth Anniversary Celebrations on May 11th at Bush Hall – tickets sold here.

AWF: Introduce a little bit about yourself.

RC: I’m an alto saxophonist from Scotland living in London. I grew up in the Shetland Islands, moved to Edinburgh when I was 12, then from there went to study in Birmingham, and have finally settled in London where I’ve been for 4 and a half years and make a full time living off playing music.

AWF: What were your experiences of arts education in school?

RC: The arts in Scotland are hugely important and really well funded. Without the education that was available within my state schools growing up I’d be nowhere. Shetland houses some of the finest folk musicians in the world and puts a lot of money behind music, and despite it’s rural location, was really into Jazz too. I started the Saxophone when I was 9 (I was already playing piano from age 4) and really as soon as I was good enough to blow a few notes and read the music I was in all the bands at school that would have me. Music was everywhere at school, choirs, bands, folk groups.

When I moved to Edinburgh it only got better. In Edinburgh alone the local authority funded The Edinburgh Youth Orchestra, Edinburgh Schools’ Jazz Orchestra, Edinburgh Schools Wind Band, Edinburgh Schools String Orchestra…..the list goes on. Although there is also an obvious class system in place – Edinburgh has an unbelievable number of private schools and at least two fee paying top level music schools, which are amazing, but not within the reach of a lot of people that were actually from there. I was really lucky to find the City of Edinburgh Music School, which is the only non fee paying music school in the country attached to a state school called Broughton High School. There is a rigorous audition process which I didn’t get first OR second time, but it was based purely on talent and not on cash flow. This was a turning point for my education and literally laid the foundations of my career.

My teachers were all professionals, and it really inspired me knowing that when they weren’t teaching us they would be off doing gigs….and that’s exactly what I wanted to do. Martin Kershaw, my saxophone teacher, really pushed me at a young age and helped me to get into Tommy Smith’s Youth Jazz Orchestra when I was just 14. From there, I joined the National Youth Jazz Orchestra, both of which I was lead Alto for for quite a number of years.

I also competed a lot in classical piano competitions, I played harpsichord in a baroque ensemble….I did a lot at school! There was a lot on offer! My school was rough as hell, but it was centered around the arts and there were incredibly talented students there who were all allowed to flourish in whatever art they were drawn to – dancers, writers, actors, artists.

I see how things are changing, and have already changed in the education system now that I teach and have two young nieces in school. Exam and study pressures aren’t balanced with the arts the way they used to be. When we were at school, we had school bands to take our minds of things, music clubs where we could spend time with other kids that were in to music, music lessons that came as standard and were for everyone! I see so many kids drop music lessons because they can’t up with the huge amount of pressure and level of exams. It’s a shame because I really had some of the best years of my life in education!

After I finished school I got a scholarship and went to study at Birmingham Conservatoire for 4 years which was great. I had some amazing experiences there. In the days when it was just ‘Birmingham Jazz’ working and we were really lucky to have artists visiting the college constantly while we were there. George Garzone, Dave Leibman, Dave Holland, Mark Turner, Lee Konitz, Jason Moran, Donny Macaslin, Mulgrew Miller, Dave Binney, Dan Weiss, the list is endless!

RC: Put the work in, it will pay off. Have a clear vision of what you want and do your best not to get distracted and pander to other peoples ideas of what’s cool and what’s not, unless it’s really going somewhere then you could suddenly find yourself wasting precious time. Try not to be disheartened when things don’t work first time and push past taking things personally. Listen, learn, read and absorb as much knowledge from people and experiences as possible. LOVE your craft and take things seriously. Know why you are doing what you are doing, because sometimes it’s not easy!

AWF: What inspires you about the AWF?

In a time when it seems be getting harder and harder for young people to find encouragement from schools to get into the arts, and harder to get support from the government for those who are already in the arts, the Abram Wilson Foundation is reaching out and giving opportunities to people at sometimes crucial points in their lives. It’s inspiring to me that the AWF are doing this purely for the love and joy of the arts and what it can do for people, it’s wonderful and essential!

AWF: Finally – what are your 3 recommended tracks from other artists that you rate?

“Six and Four” by Joe Lovano  – Joe is one of the world’s greatest living saxophonists and one of my absolute favourites. He’s constantly hip. This is from his album A Joyous Encounter.

“Laputa” by Hiatus Kaiyote – they are brilliant musicians, and amazing song writers. This track is a triple threat, an amazing song remixed by another great artist, Taylor Mcferrin, to feature yet another great musician and songwriter, Anderson Paak.

“Triangle” by Soweto Kinch – Soweto is not only an amazing saxophone player but he’s done something with his style that not many people can pull off. He’s a super talent that we’re lucky to have in the UK.

You can purchase tickets for our fifth anniversary celebrations at Bush Hall here.