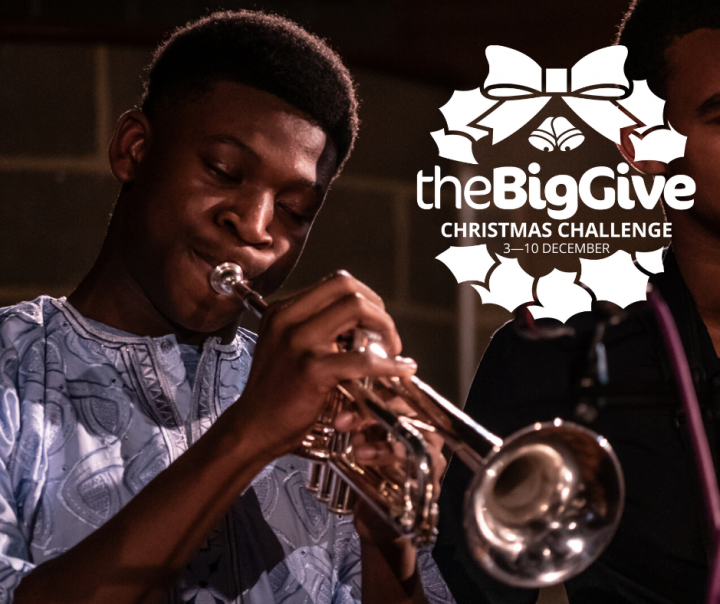 Today, and for one week only, we are asking you to help us raise funds for an amazing project called Future Sound 2020, in our Big Give Christmas Challenge.

Our first Future Sound project ran last year, won a national award and was transformational for the young people who took part, many of whom faced barriers to music and aspiration because of challenges at home. So we’re doing it all again, yay!

This time, members of Mercury Prize-nominated SEED Ensemble will go into Mossbourne Community Academy school in Hackney and support young people aged 11-18 years with musical talent and potential. They’ll teach them SEED compositions and work with them to compose their own music. The students and SEED will then perform together at award-winning jazz venue Church of Sound. This will be followed by a SEED Ensemble professional gig at the same venue in April next year.

It’s a super special project for talented Deschanel Gordon, who plays keys for SEED Ensemble, as we’ll be working with his old school! So I caught up with Deschanel to find out why he’s supporting our Big Give Christmas Challenge.

Jennie: What inspired you as a teenager to become a professional musician?

Deschanel: I think just seeing lots of musicians in church when I was younger. I just, I always wanted to play just like them, and then I started getting lessons. And from there I got into music, and then learned about jazz, I had piano lessons. Just continually being inspired by a lot of people around me when I was younger.

Jennie: What does it mean to you to be back at your old school for Future Sound?

Deschanel: It’s a big deal for me because I know what it’s like to be young and to see musicians playing, and being like, ‘I wanna be like that.’ So if I could have the same effect on a young person, that’d be amazing.

Jennie: It’s been a massive year for SEED Ensemble, including being nominated for the Mercury Music prize. What’s on the horizon for 2020?

Deschanel: SEED is going on tour next year, which will be amazing. After the Mercury Prize nomination, a lot of cool stuff has come up. So we’ll be in the UK, and then we’re gonna be around Europe and maybe even South Africa if it happens.

Please DOUBLE your donation through our Big Give Christmas Challenge before 12noon on 10th December and help us work with young people who face barriers to music. Your donation will give them access to contemporary, professional, upcoming, live, award-winning young, exciting musicians with whom they wouldn’t cross paths ordinarily. It’s an inspirational and aspirational project and we need you to help us make it happen!

We want to help young people who are interested in pursuing music as a career but may not have considered it or had the opportunity. We hope you can help us do that.

Plus, it’s a really, really important time to be donating to music. Drastic cuts to public spending over the last decade have had a real impact on the arts in schools, particularly music, hitting young people from disadvantaged backgrounds the hardest.

We need to raise £4,000 pounds this week through the Big Give Christmas Challenge campaign. Your money will go towards our total investment for the project. We have already secured generous grants of £10,000 from PRS Foundation and £14,000 from Arts Council England so we just need your support to get us over the line and make Future Sound 2020 happen.

Please donate HERE now! If you give before 12 noon on 10th December, your gift will be DOUBLED via the Big Give and our kind sponsors The Childhood Trust. So your one donation will have twice the impact. There’s no better time to give! Thank you.