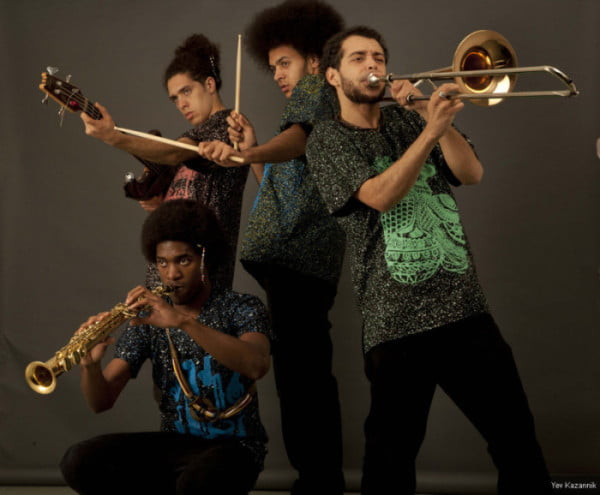 For those of you who haven’t heard of United Vibrations, they were formed nine years ago by three brothers, Kareem Dayes, Ahmad Dayes, and Yussef Dayes.  They began as an octet and then about five years ago scaled things down to a quartet, with Wayne Francis II joining as the fourth band member.  Their first album was called Galaxies Not Ghettos.  Abram had a lot of time for the band and their music because as he said, “they stand for something, man”.

Kareem got to know Abram properly when he was about 17 years old; Abram asked him to join a new band he was setting up called Seulja.  At the time Kareem was still in school along with fellow Seulja band member guitarist Miles James, who now plays with vocalist Michael Kiwanuka.  I’ve mentioned before that Abram had an incredible ability to spot young talent and wasn’t afraid to support their development by involving them in his music.  Kareem was no exception and it’s something that has always stayed with him.

Kareem left Seulja to focus on United Vibrations.  When I spoke to him about the band he said “it was a way to make the music we wanted to hear; all the music we loved was by people who had died….we wanted to say what we wanted to say and inspire new ideas and emulate the people we admired, like Bob Marely and Fela Kuti.  And we wanted to do it within the context of London and what was going on here”.

Very recently United Vibrations recorded a new song called Don’t Be Sad for their EP, We Never Die.  Don’t Be Sad is described by the band as “as close to a ballad as we’re likely to get…A tribute to Gill Scott Heron, it is a moving hymn that will bring solace to anyone who has lost someone close. It features a string arrangement, which lifts the sound to a euphoric crescendo and shows another, more gentle and beautiful side to United Vibrations. This song is sure to find its way into many people’s hearts”.

I picked up on it because it’s also dedicated to Abram, who Kareem described as “a real inspiration”.  I found it to be incredibly uplifting, beautiful and moving.  When I asked Kareem about how the song came about he told me, “it happened organically during a rehearsal, the day after Gil Scott died.  We’d followed his music for a long time, and we were really sad to hear of his death but there was also a poeticness to it as his work had received a resurgence in the last year of his life; he’d released a new album just before he died introducing a new generation to his music, which was beautiful”.

The song was “inspired by different views of life and death.  In Huey P Newton’s autobiography, Revolutionary Suicide, he talks about how if you do something that you believe in passionately, with the utmost integrity and truth, it never dies.  He said that he wasn’t afraid of death or afraid to live.   If you are afraid of death you are not free to live fully”.

When I asked Kareem what the band hoped to achieve with their music he responded, “we didn’t want our music to be entertainment for entertainments sake.  For me, music is a way to express something beyond the self, it helps me escape. It can be a spiritual experience where you transcend the body, it doesn’t always happen, but we try and lock into that space when we play.  It’s a continuous journey and we’re always on that journey to get into that space…The music industry is like junk food, it’s a quick fix, and we’re trying to offer something more nutritional.  Music can fulfil an important role of healing and connection, it can heal on a deeper level, it’s not a throw away thing, it’s an integral part of life”.

United Vibrations have just got back from the Buskers Bern Street Music Festival in Switzerland where they played 10 gigs in three days and they’re off to Sardinia this week.  In between performances, they’re trying to finish their second album which they’ll release on their own label, 12tone.   They use the profit from their record sales to invest in their community project, the Rural Urban Synthesis Society which embodies the philosophy behind their music.  As part of their work with the Rural Urban Synthesis Society, the band have set up a community land trust with the aim of building sustainable housing, which will create more energy than it will use and grow food instead of creating waste.

Kareem went on to explain that “agriculture is the most destructible thing on the planet so we wanted to create a community food forest, where we would grow food without pesticides or irrigation…there are so many solutions (to helping the planet) and we want to embody them, we want to be a working physical example that people can’t question – it’s there and it’s a way that people can follow…For our new album we’ve written a story which addresses the issues around ecology and economics – it’s a short story where we’ve created a myth reality around the band and the project to help appeal to kids.  We’re also filming a documentary at the same time.  We want to present the project as a whole world that people can get involved in”.

It was very inspiring talking to Kareem, United Vibrations are doing wonderful work – they are authentic and passionate about what they do, as well as being very talented musicians.   I hope you like the music as much as I did.